Drawing inspiration from both his Christian faith and the peaceful teachings of Mahatma Gandhi, Dr. King led a nonviolent movement in the late 1950’s and ‘60s to achieve legal equality for African-Americans in the United States. While others were advocating for freedom by “any means necessary,” including violence, Martin Luther King, Jr. used the power of words and acts of nonviolent resistance, such as protests, grassroots organizing, and civil disobedience to achieve seemingly-impossible goals. He went on to lead similar campaigns against poverty and international conflict, always maintaining fidelity to his principles that men and women everywhere, regardless of color or creed, are equal members of the human family.
Dr. King’s “I Have a Dream” speech, Nobel Peace Prize lecture and “Letter from a Birmingham Jail” are among the most revered orations and writings in the English language. His accomplishments are now taught to American children of all races, and his teachings are studied by scholars and students worldwide. He is the only non-president to have a national holiday dedicated in his honor, and is the only non-president memorialized on the Great Mall in the nation’s capitol. He is memorialized in hundreds of statues, parks, streets, squares, churches and other public facilities around the world as a leader whose teachings are increasingly-relevant to the progress of humankind.

This complex social situation is perhaps best summed up by King himself in his “Letter from Birmingham Jail”, written to members of the Birmingham clergy and religious community who had urged patience and restraint of the civil rights movement. Of the Black Nationalist movement, King notes,
It is in this same sense of a middle path that Gandhi famously said, “nonviolence is a weapon of the strong.” This is not to say that nonviolence is always the correct tactic, something for pacifists with a strong sense of moral certitude to consistently follow regardless of the context. Rather, this statement means that nonviolence is a tactic best employed by protest and resistance movements that are in a position of strength. King’s civil rights movement, similarly to Ghandi’s independence movement, found itself in a position of strength—and in fact drew strength from the more militant Black Nationalists.

As a theologian, Martin Luther King reflected often on his understanding of nonviolence. He described his own “pilgrimage to nonviolence” in his first book, Stride Toward Freedom, and in subsequent books and articles. “True pacifism,” or “nonviolent resistance,” King wrote, is “a courageous confrontation of evil by the power of love” (King, Stride, 80). Both “morally and practically” committed to nonviolence, King believed that “the Christian doctrine of love operating through the Gandhian method of nonviolence was one of the most potent weapons available to oppressed people in their struggle for freedom” (King, Stride, 79; Papers 5:422).
While intellectually committed to nonviolence, King did not experience the power of nonviolent direct action first-hand until the start of the Montgomery bus boycott in 1955. During the boycott, King personally enacted Gandhian principles. With guidance from black pacifist Bayard Rustin and Glenn Smiley of the Fellowship of Reconciliation, King eventually decided not to use armed bodyguards despite threats on his life, and reacted to violent experiences, such as the bombing of his home, with compassion. Through the practical experience of leading nonviolent protest, King came to understand how nonviolence could become a way of life, applicable to all situations. King called the principle of nonviolent resistance the “guiding light of our movement. Christ furnished the spirit and motivation while Gandhi furnished the method” (Papers 5:423). 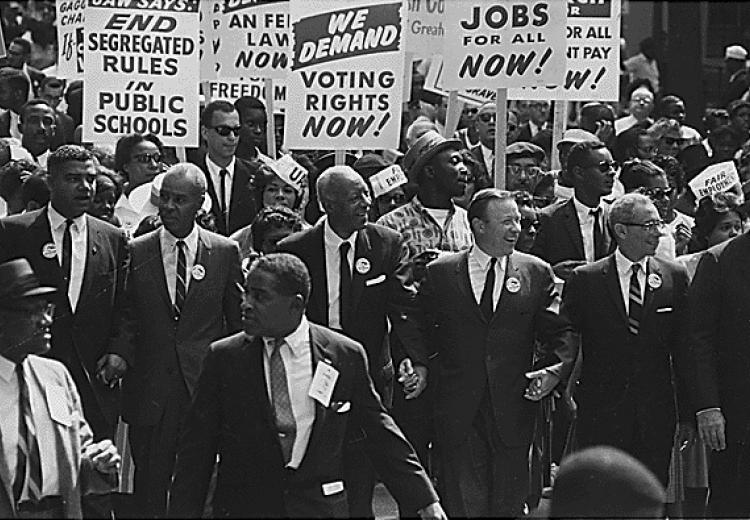 Examine the reasons why Malcolm X thought integration was a false hope for blacks in America.
Evaluate the merits and shortcomings of the competing philosophies around achieving civil rights.