Written by people who wish to remain anonymous
You can help us out by revising, improving and updating this section. 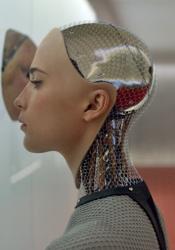 “Ex Machina (film).” Wikipedia. Wikimedia Foundation, 25 Mar. 2017. Web. 26 Mar. 2017.
Alex Garland specifically toys with gender in “Ex Machina.” By making Ava female and using feminine pronouns, Garland comments on not only gendering but the sexualization of young women. Garland demonstrates social hierarchies of gender by questioning what it means to be a creator and how the gender of this creator affects the gender and sexualization of the machine. For example, at one point Nathan says “im like her dad.” In this way the power structure between omnipotent creator and creation becomes not only a sexual relationship but also a fatherly one. As Ava dresses she demonstrates a childish wonder and while she undresses, the object of sexual attraction. In this way, Garland explores the relationship between a powerful being, in this case male, and an initially vulnerable being, in this case female.

Written by people who wish to remain anonymous
This movie draws a clear distinction between what it means to be human and have humanity. Nathan is human but his actions towards both Ava and Kyoko, and indeed even Caleb as his deception is later revealed, suggests that he lacks humanity and the traits that come with it, such as compassion and kindness. He treats Kyoko like she is a slave and it is implied she is also used sexually, despite her obvious reluctance. He teats Ava cruelly by keeping her locked up and treating her like a prisoner. Alternately, Ava is not human, but she seems to harbor traits of humanity. She is shown to be kind and intelligent and desires to have freedom from Nathan’s cruel injustice. The juxtaposition of a human and A.I in opposite roles highlights to the audience that their genetic composition does not make them humane, but rather their actions do.

In One False Move (1991), African American director Carl Franklin uses the pastoral motif within film noir in a unique way, one that has ties to African American cinematic and literary traditions. In Franklin’s extraordinary film, the pastoral becomes the site of a primal crime, as it does in Oscar Micheaux’s Within Our Gates (1920) and John Singleton’s Boyz N the Hood (1991). In Singleton’s film about contemporary L.A., we remember the chilling moment when the eerie quiet of the black urban neighborhood is bathed in a menacing, pastoral sunlight. Although this scene is indebted to Roman Polanski’s Chinatown (1974), its effect expresses a distinctly African American theme. Polanski’s “sunshine noir” traces the primal crime back to American greed, specifically to the theft of the Owens Valley water. Singleton’s pastoral moment suggests that the snake in the urban landscape is the legacy of slavery. His scene gives special poignancy to Julian Murphet’s recent argument that film noir, especially the films of the 1940s, is often about noirs (Murphet 24-35). Franklin’s technicolor thriller goes a step further than Singleton’s work in that the urban crime occurs in the film’s opening scenes, but its explicit origins lie in the American South and, by extension, in the history of the Republic itself. (1)
F. Scott Fitzgerald’s The Great Gatsby (1925) eloquently links our nation’s origins with the pastoral impulse. Nick Carraway, we remember, imagines a time when Long Island first “flowered once for Dutch sailors’ eyes–a fresh, green breast of the new world” (189). Yet in Fitzgerald’s novel, the pastoral contains within it the seeds of its “uncanny” opposite, for the attempt to escape or transcend history inevitably triggers its return. Gatsby’s “ghostly heart” (101) yearns to recapture a past unencumbered by mutability, but that imagined past is itself corrupted by history, indeed by those very Dutch whose desires for Paradise cannot escape the carnality.

This article analyses three comics series: writer Brian K. Vaughan and artist Tony Harris’ Ex Machina (August 2004 — August 2010); writer Brian Wood and artist Riccardo Burchielli’s DMZ (November 2005 — February 2012); and writer Garth Ennis and artist Darick Robertson’s The Boys (October 2006 — November 2012). Taking literary critic Laura Frost’s concept of ‘archifictions’ as its starting point, the article discusses how these series frame the September 11 attacks on New York and their aftermath, but its primary concern is with their engagement with the larger social ramifications of 9/11 and with the War on Terror, and with how this engagement is rooted in and centred on Ground Zero. It argues that this rooting allows these comics’ creators to critique post-9/11 US culture and foreign policy, but that it also, ultimately, serves to disarm the critique that each series voices in favour of closure through recourse to recuperative architecture.
Fans and scholars have long claimed that US comics have a special relationship with New York City. This claim is particularly common in relation to Marvel Comics (Bainbridge 2010; Costello 2009: 11) or to superhero comics (Reynolds 1992: 18-25). Others go so far as to claim, for example, that NYC ‘enjoys a special relationship to the cartoon arts’ (Worcester 2011: 139). Two particular problems with such claim stand out: first, they do not explain the significance of this supposed relationship; second, and more important, they do not account for the.