Another argument against euthanasia, this time a practical one, is that euthanasia is not needed when proper palliative care is available. Terminally ill patients are given drugs and other types of support to help relieve the physical pain and mental effects of being terminally ill. If this palliative care is competent then it may be able to relieve the patient of a lot of pain and discomfort, and will give the patient a better quality of life. It has been stated by the World Health Organisation that “palliative care affirms life and regards dying as a normal process; it neither hastens nor postpones death; it provides relief from pain and suffering; it integrates the psychological and spiritual aspects of the patient.” Not all of the trauma experienced by a patient is physical however, and drugs alone cannot relieve the emotional pain felt by someone counting the days until their death, although the emotional support that can be provided from palliative care can go a long way to make the last part of a terminally ill patients life less emotionally stressful. Effective palliative care will give the patient and their loved ones chances to spend quality time together, and will allow the patient to live the remaining part of their lives with as much of the distress and pain felt by a terminally ill patient removed as possible. Some argue, however, that along with the introduction of euthanasia, there could be a reduction in the availability of palliative care, as euthanasia is more cost effective than prolonging the life of dying patients. This could possibly reduce the availability of care for terminally ill patients who do not wish to be euthanised. Sometimes, however, palliative care is not enough for some patients who’s lives are just too unbareable, so could the termination of their lives be the best option?
Euthanasia is the termination of an extremely ill person’s life in order to relieve them from the suffering the illness is causing. Euthanasia is usually only conducted on a person with an incurable condition, however there are other instances when euthanasia can be carried out. In many countries, such as the UK, it is illegal to assist anyone in killing themselves. Should a terminally ill patient in a great deal of pain and discomfort be allowed to terminate their life, if that is what the patient desires? And who has the right to deny a patient who is in complete suffering a less painful ending to their lives? These questions cause a huge amount of controversy, and have been strongly debated. Those in favour of euthanasia argue that it should be up to the patient, whereas those against argue that euthanasia could be misused, leading to very disturbing situations.

The topic of euthanasia and enabling its legality continues to promenade desks of law and policy makers as a noteworthy consideration for countries. Euthanasia`s literal translation from its Greek origin means “Good Death” but is defined as “an intentional termination of life by another under the explicit request of the person who wishes to die.” (Lehman, 2005). Euthanasia can be mainly categorized as voluntary and involuntary. Voluntary euthanasia the patient requests aid to die and involuntary
According to Paul Keating “Euthanasia is a Threshold Moment We Should Not Cross” from The Sydney Morning Herald, euthanasia is a negative form of treatment for patients with terminal illnesses and has negative effects on other aspects of society. Multiple studies are referenced and examples are given to support the authors claim that euthanasia is wrong and should be avoided. The use of euthanasia is related to assisted suicide or the intentional killing of a patient by physicians. The author also

conflict of permitting mercy killing, euthanasia provides a multitude of benefits such as, alleviating the pain of terminally-ill patients, cutting the expenditure of struggling families, and letting individuals practice their freewill and judgment. The first chapter of the Bible states the importance and sanctity of life. It is to be valued and nourished not only for one’s holistic development, but also to be a helping hand to others. Because of this, euthanasia remains illegal in most countries because
die and rest in peace? This is called Euthanasia, which means the termination of a patient’s life who is suffering from excruciating pain and a terminal disease. Euthanasia came from the Greek for good (“eu”) and death (“thanatos”) “good death”(Sklansky, (2001) p.5.) There are more than four types of euthanasia such as active euthanasia, which means that death is caused directly by another person by giving the patient a poisonous injection. Passive euthanasia refers to the withdrawal of treatment 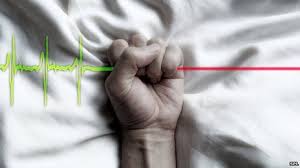 Often, a patient’s life is much worse than death. There are numerous diseases that modern medicine cannot cure, and which cause severe pain and suffering to patients. For example, the “locked in” syndrome: people who have it cannot move a single muscle. One of such sufferers, Tony Nicklinson, in 2010 and 2012 was denied his right to die by the British High Court. Unable to commit suicide himself and also unable to ask anyone to help him end his life (sufferers of the “locked in” syndrome cannot move even their tongue or eyeballs), Tony starved himself to death (Listverse.com). The number of patients suffering from this and other diseases, who have no other way to stop their suffering, is uncountable, but they are doomed to live. Is it not unfair that they are not allowed to end this suffering?
The opponents of euthanasia claim that helping a person to die is wrong, because one can never know when the cure for a terminal disease will be invented, or when recovery will occur; thus, claim the opponents, euthanasia shortens life spans of patients. However, according to statistics, in 86% of the cases, euthanasia shortened a patient’s life no more than one week—usually, just a couple of hours. Patients ask for euthanasia when their chances for recovery are nearly impossible; besides, the last days of a patient’s life are usually full of agony and excruciating pain, and euthanasia is the only way to stop it (Listland.com).

Proponents and opponents disagree on at least four controversial issues. The four major issues are, but not limited to, the nature autonomy, the role of beneficence, the distinction between active and passive euthanasia and the public and social implications of legalization. The nature of autonomy basically means that all people are granted the right to think, feel and act for him or herself. The first and fourteenth amendments were put into place to protect an individual’s freedom of religion, speech, privileges, immunities, and equal protection. The role of beneficence involves the physician’s duty to relieve suffering. The distinction between passive and active euthanasia, or killing and allowing one to die. The public and social implications of legalization are totally based on one’s individual feelings.
He offers his first hand account of meeting with the Grim Reaper:
I lay at the point of death. A congestive heart failure was treated for diagnostic purposes by an angiogram that triggered a stroke. Violent and painful hiccups, uninterrupted for several days and nights, prevented the ingestion of food. My left side and one of my vocal chords became paralyzed. Some form of pleurisy set in, and I felt like I was drowning in a sea of slime. (338)